Countries throughout Europe will have their own unique road rules. It is important that you are aware of each of these rules, so that you don’t end up breaking the law inadvertently when travelling across the continent.

See how well you can distinguish between the likes of Dutch drivers and Cypriot car owners by taking this European road rules quiz compiled by used van retailer Van Monster: 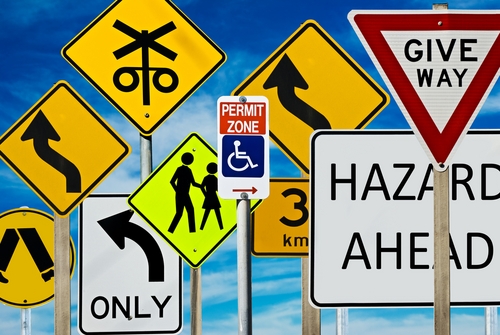 What does a yellow diamond sign with a diagonal black line running through it mean when driving in France?

How many red warning triangles must you carry in your vehicle if you’re not a resident of Spain?

What is the meaning behind the phrase ‘zona traffico limitato’ when it’s seen on a sign in Italy?

In Cyprus, which side of the road do you drive on?

When driving in Belgium, what are the rules when it comes to using a mobile phone?

In the Netherlands, what should you do if a tram or bus stops in the middle of the road to allow passengers on and off?

When can you use spiked tyres on your vehicle when driving in Denmark?

This sign means that you are now travelling on a road whereby you must yield when reaching any subsequent intersections.

You are only required to carry one red warning triangle when you are driving in Spain but not a resident of the country. Meanwhile, it is compulsory for residents to carry two.

When translated, ‘Zona Traffico Limitato’ means ‘Limited Traffic Zones’. Often used around Italy’s historical areas, their purpose is to ease congestion and limit the amount of pollution witnessed around these usually popular sites.

Use your mobile phone while driving in Belgium, and you are at risk of a fine. However, this penalty does not apply if you access your device via a hands-free system.

Also be aware that trams have priority over other forms of transport in the Netherlands.

During this time, spiked tyres must be fitted to all four wheels of your vehicle if used.

How well do you know your European road rules? If you feel you could benefit from some further knowledge on this topic, read these in-depth country-by-country guides provided by Avis and the AA.

Tags : road rules
« What Can We Learn from Inchcape’s Luxurious New Showroom? Plenty!
Advice for reducing your motoring costs »